An Interview with Author Sarah Gerard

I first heard of author Sarah Gerard when I was a student at The New School’s MFA program (where she also did her MFA). My thesis was about my ongoing struggle with anorexia, and my advisor told me to look up Sarah’s debut novel, Binary Star, which follows the harrowing story of a woman suffering from an eating disorder.

Binary Star impacted the way I viewed my body. Sarah wrote that anorexia, like a pulsating star, burns fuel that isn’t replenished. I was instantly hooked on her writing. The novel’s prose was luminous and intoxicating, and it allowed me to see the forest for the trees when it came to my eating disorder.

I got to work with Sarah when Harper Perennial published her essay collection, Sunshine State, last April. In Sunshine State, she examines coming of age against Florida’s Emerald Coast, and elucidates the nefarious psychic energy that can fester, not only deep in the ridges of the gulf, but in the residents themselves. In a nutshell, she uses Florida as a means to study economic and environmental perils haunting our society.

I sat down with Sarah to discuss Sunshine State, the fictional heroine that inspired her youth, her grassroots approach to promoting her books, and her upcoming art book, Recycle (available for preorder from Pacific).

Sunshine State has received a lot of recognition—it hit the best of 2017 list for NPR and the New York Times, among others, and it was longlisted for the 2018 PEN Literary Awards. When you first started writing it did you ever think this would be the end result?

In my fantasies, I have to believe anything is possible, but if I try to write to gain recognition, the writing will be uninspired. When I started writing Sunshine State, I had only a vague idea of what the book would be about. I had no idea how it would ultimately come together, so every step of this process has been a wonderful surprise.

What was the first thing you jotted down for Sunshine State?

It’s hard to say, because I wrote the first of these essays, or early drafts of them, as early as 2012. The first thing I wrote on paper was probably a marginal note in a copy of Gerald Murnane’s Inland, which I didn’t ultimately end up referencing in Sunshine State. I was reviewing it for BOMB magazine while I was in Cleveland watching my grandfather die, so inevitably the review became also partially about my grandfather’s death.

Soon after, I reread The Velveteen Rabbit and began to write about my grandfather again in a personal essay, and sentiments connected to both of those texts found their way into my essay “Rabbit”, which appears in Sunshine State, but only direct references to The Velveteen Rabbit appear in the essay.

Rewinding back to your childhood, who was the first fictional heroine to inspire you?

My favorite book as a young person was The Secret Garden, so probably Mary Lennox. She seemed to understand something about solitude. Also, I was always sneaking into places where I wasn’t allowed to be. Mary and I are kindred spirits.

What was the decision process like to pursue an MFA?

I’m a very lucky person, and very persistent when I want something. I was living in St. Petersburg, Florida, which is now becoming a great place for literary writers, but at the time had very few resources for us. I was writing local news but very much wanted to learn to write fiction. I had also inherited some money from my grandparents to use for college. I applied to a bunch of schools but only got into one in the States, which was The New School. I was waitlisted at The New School, no surprise now, because the stories I submitted with my application weren’t strong.

You must’ve been very anxious.

I began mailing the writing office a package every few days with published clips, and copies of journals I had edited. The New School is not a funded MFA, but I got a small scholarship, so I would have to pay for the rest of it out of pocket. I could do this with my grandparents’ money. When people ask me now about pursuing an MFA, I tell them not to go into debt. The likelihood is that you are not going to pay off your student loan debt on a writer’s income.

What’s one word that sums up your MFA experience? 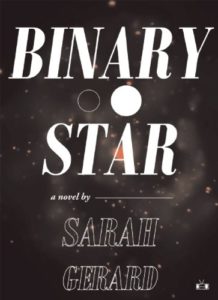 Let’s talk about Binary Star, which you put so much work into that wasn’t just writing. It can be very time consuming promoting a book.

When Binary Star came out, I Kickstarted a book tour that took me all over the country. It was a lot of work, almost like having a third job, and I ultimately quit my job at BOMB because I had needed to take so much time off for the tour—six weeks, all together.

In the meantime, I was able to sell the proposal for Sunshine State. Writing Sunshine State would have entailed taking even more time off from work, which wasn’t fair to the magazine. An intern at the time had been filling in for me (she’s now in the MFA program for poetry at Iowa Writers’ Workshop—a brilliant poet named Rebecca Zweig—everyone look her up). There’s much more to being an author than putting words on a page. It’s a commitment to the entire life of your book.

What advice would you give other authors who take a grassroots approach to getting their books out there?

Treat people like people. You’ll need to ask favors of complete strangers, and that will be humbling for you. Be humble. Show gratitude. Send thank-you notes.

Binary Star paralyzed me as a reader. The prose is just so magical and raw. However, what makes it an extra special experience is listening to the audiobook version, which you narrated. What was it like recording it?

Wow! I thought no one would ask me about this. It was laborious. Which is saying a lot, because Binary Star is a short book. I wanted to be the one to record it because sound is such an important part of this prose—all prose, but especially Binary Star. It’s fast, it’s rhythmic, it rhymes, there’s alliteration and double-entendre, and dialogue that isn’t always tagged.

However, once I got into the recording booth, I realized how difficult it would be to read this text in the way I hear it inside my head, and also in a way that’s intelligible for people listening, and accurately translates what’s on the page, down to the letter. I wasn’t allowed to edit the text as I read, which I almost always do. It was frustrating for me as a recovering perfectionist. 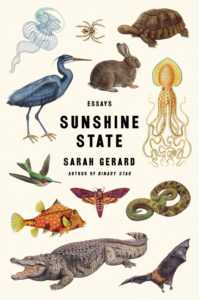 What was it like publishing Sunshine State? Was it nerve-wrecking when you sent it off to your agent?

Well, I was working closely with my editor, Erin Wicks, who became my dear friend through the writing process. So, my agent actually didn’t see portions of the manuscript for almost a year after selling the rights to Harper Perennial. I felt very supported at Harper Perennial, so nothing was all that nerve-wracking until the book was published and the reviews started coming out. I had to ask people to read them first before I did. I’m too sensitive for this!

What was it like working with your editor, Erin Wicks?

She’s an angel sent from heaven, a true-blue friend, the sister I never had. We now have periodic sleepovers.

What were your first impressions when you saw the cover?

Elation! Jo O’Neill is the designer and she made me feel very seen. I had no suggestions for changes whatsoever. I knew I wanted animals on the cover—I believe Erin actually thought of using the Ernst Haeckel illustrations, which of course are perfect.

What’s one piece of advice you’d give writers who are looking to shop around their manuscripts?

Take your time. If you have doubts about it, sit on it. You want to be confident in your work when you send it into the world.

What books are on your night stand?

So many! Among them: The Evangelicals by Frances Fitzgerald, Fever Dream by Samanta Schweblin, and Caca Dolce by Chelsea Martin. 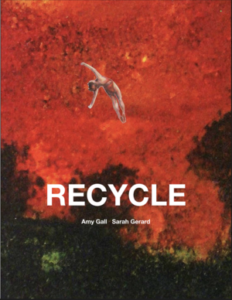 Your first art book is coming out this month, Recycle, which is a collaboration with writer and collage artist Amy Gall. When did you first start making collages?

I started making little assemblages before moving to New York. I was living in Florida and dating an artist, and would spend a lot of time in his studio. He had boxes and boxes of printed matter, and discarded pieces of paper of various textures, and other interesting materials, and glue sticks lying around. It didn’t feel serious to me then—it was more of a way to play, and create something without putting a lot of pressure on the creation. I didn’t think that what I was making was art.

Then in 2014, when I Kickstarted the book tour for my novel Binary Star, I needed to come up with some rewards for people who donated, and decided to make these little postcard-sized pieces. I enjoyed making them so much that I just kept going after the Kickstarter was funded. Over time, I challenged myself to make them bigger and bigger.

You’ve married making collages and writing in your monthly column Mouthful. How does the process of making a collage differ from your writing process?

I don’t have a topic in mind when I begin making a collage the way I do when I write an essay or a work of fiction. The picture comes into focus as I assemble the pieces. I’ll flip through some magazines and listen to my gut when it tells me to take this picture of an elephant, or that bright blue piece of fabric, or that old car.

I might be looking for certain colors and textures, or maybe images of food, or shapes that could be water, or be mountains, but I have no idea why I’m drawn to these images in the beginning. It’s completely subconscious—I just know that I’m drawn to them. Then I’ll try out different arrangements of two or three pieces, whichever call to me most, and usually end up with a centerpiece that I work around. I continue flipping through magazines as I build.

Paul Florez received his MFA in fiction at The New School. He is currently an auctioneer and his work has appeared in HuffPost, HelloGiggles, Queerty, and The Advocate. You can follow his misadventures over on twitter @mrpaulflorez.

Sarah Gerard is the author of the essay collection Sunshine State, a New York Times critics’ choice, the novel Binary Star, a finalist for the Los Angeles Times first fiction prize, and two chapbooks. Her short stories, essays, interviews, and criticism have appeared in The New York Times, Granta, The Baffler, Vice, BOMB Magazine, and other journals, as well as anthologies. Her paper collages have appeared in Hazlitt, BOMB Magazine, Epiphany Magazine, No Tokens Journal, and the Blue Earth Review, and have shown in Denver, Colorado, and Hudson, New York. Recycle, a book of collages and text co-authored with the writer and artist Amy Gall, is forthcoming from Pacific in March 2018. She’s been supported by fellowships and residencies from Yaddo, Tin House, PlatteForum, Pocoapoco, and Ucross. She writes a monthly column for Hazlitt and teaches writing in New York City.