So often we talk about the art of writing—creative quirks, elaborate plots—but the truth is that writers need to live and living costs money. What prompted you strike up a dialogue about the business of writing? Was there a specific catalyst (an event, an article, a conversation)?

I’ve always been interested in the machinery beneath the façade, whether it’s concerning what people call “the writing life” or other topics. It’s that bit of journalist in me: I always want to ask, “how?”

As a person who’s always worked, it was always puzzling to me that no one talked much about work when it came to talk about being a writer. This book is in many ways the natural evolution of many years spent exploring this topic and talking about it with other writers.

I started Who Pays Writers? back in 2012 when I was freelancing full-time, a mix of copywriting and journalistic writing. because I was looking for my own answers to that question. From there, other writers got into it, and I kept hearing from them that they wanted more context behind the numbers. So from Who Pays came Scratch magazine, which ran online for a couple year
s before closing, and from Scratch mag came Scratch, the book!

Generally, there isn’t much money in writing. After being steeped in this topic for several years, have you noticed any trends that might give writers hope on the financial front? 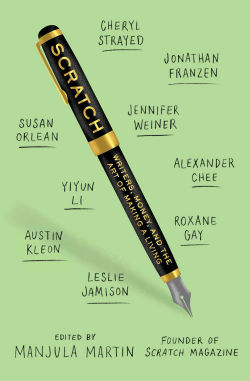 I don’t think it’s necessarily true that there’s no money in writing. It’s not a great way to achieve job security, true, and if you want to be a writer in order to get a lot of money, you’re probably setting yourself up for a world of pain. It also very much depends on what type of writing one does. But plenty of authors make a living, and even more people use writing as a skill to earn a living in non-literary or journalistic settings. Creative jobs aren’t actually meant to be easy. Our society has not always valued creative work in the same way it values other work, going back to the Greeks, as Colin Dickey talks about in his essay in Scratch.

I do think that in recent years a hopeful trend I’ve seen is that writers are talking more openly about their realities of making a living, as in Scratch. People are seeking solidarity with their peers, sharing knowledge, and helping each other stand up for themselves. I see this particularly with women-identified writers who are doing amazing work to level the playing field.

For example, at the book’s recent San Francisco launch party, contributor Laura Goode talked about how she’s very willing to discuss money and payment terms with any woman-identified writer who asks her, as a small way to help lift up other women in this field and spread what knowledge she herself has. Writers do this all the time informally, and all that, to me, is very hopeful. Scratch is simply putting those types of experiences on paper, so they can (hopefully!) be shared more widely.

As the publishing industry struggles to keep up with lightning fast changes in technology, are writers (and the money they are due) getting left behind?

Is technology really changing all that quickly? Ways of marketing and delivering technologies change but the basic technologies, not so much. With books, the way we read and distribute books is pretty slow to change, in fact. eBooks are not exactly the new kids on the block nowadays. An app is just a tool for delivering something that already exists, except now that something is “inside your phone!”.

Journalism has its own difficulties brought on by the digital economy, which are well documented, but for books, hand-to-hand sales, whether in person or virtual, are still the most effective way to sell a book, that we know of. There’s something sort of lovely about that, actually.

That said, I do believe that digital technologies make it easier for employers to exploit their workers’ labor, but I don’t think publishing is unique to that. It’s happening in every industry. Tech may seem new, but the exploitation, the actual methods of exploitation aren’t exactly new. It’s more, better, faster, and for less remuneration. Now it’s that, but even more, even faster, and inside your phone.

I think that it would behoove any industry to examine its relationship to new technologies or new business models. Writers are always at the bottom of the vast economic pyramid built around their labor. There are stars, but then there is everyone else. It’s similar in other creative professions, too. We should maybe think about why that is, and how we might come to change it.

What was your process assembling this anthology? Did you know who you wanted to reach out to ahead of time? And did the book evolve in any unexpected ways?

Because Scratch is an anthology, I wanted potential publishers to have a really clear picture of it, so I actually got most of the authors to sign on to the project before the proposal sold. I did some old-fashioned reporting, tracking down people’ email addresses, and just asked them. Many contributors already knew of Scratch mag, but many hadn’t, and they said yes because they thought it was a fascinating topic. So I went in to the book proposal with a pretty solid Table of Contents, and it honestly didn’t change all that much after that.

Deciding the lineup was a classic combination of pairing writers I admire with particular topics I wanted to hear them on; sometimes I’d pitch a topic, sometimes they would. And then there’s chance – who happens to say yes, and when, and how things shift as schedules become solidified and themes materialize. I was really committed to having a mix of emerging and established writers in the book, because I think it’s important that writers who are at different career stages all talk with one another.

All in all, with thirty-three contributors, it was a lot of work! But, having heard horror stories about putting together anthologies, I would say it went more smoothly than I anticipated. Every contributor has been enthusiastic and generous with their time and attention. I’m in the midst of my book tour now, and in each city I’m meeting different contributors, so to me Scratch feels like its own little community.

What are some of your favorite pieces of wisdom from the book?

One thing I love about this book is the wide variety of opinions represented. Having people like Jonathan Franzen and Mallory Ortberg and Richard Rodriguez appear on the page side by side is a really amazing and special and sometimes hilarious thing. This means that sometimes people have conflicting opinions, and I think that’s great.

For example, in the book Susan Orlean talks brilliantly about how being a freelance writer is running a small business, and she initially struggled to acquire those skills. While on the other hand, Yiyun Li is essentially like, screw marketing, I just write. Although it’s one of the less scandalous ones, because she doesn’t discuss numbers, I love Yiyun’s interview. She isn’t under any illusions about the romance of the writer’s life or the delicacies of writers’ constitutions. She doesn’t worry about competition or marketing or visibility, because she views her competition as the greats, the “dead authors” who came before her.

Conversely, I think there is a wealth of wisdom to learned in Choire Sicha’s essay, in which he explains how advertising on the internet actually works. Choire is the founder of the Awl network and knows of what he speaks, and anyone seeking to earn a living through writing that is published online should read that essay. Quickly.

The overall nugget of wisdom I’ve taken away from editing Scratch is that everyone has a different approach to money and career, and that’s okay. The important thing is to know yourself. Know your strengths, but also know your weaknesses or your issues when it comes to work and money, and then learn to either overcome those issues or, more pragmatically, to structure a life for yourself that accommodates them. No one will have your exact writing career, or do exactly what you do, and that’s as it should be. It doesn’t mean you’re alone; it means you’re surrounded by other writers you can learn from and share with, people whose experiences are real and valid, and when we hold up all our experiences together in conversation with one another, we all get stronger.

Celia Johnson is the Creative Director of Slice and author of two nonfiction books, Odd Type Writers and Dancing With Mrs. Dalloway.

Manjula Martin is a writer and editor. She was born in the Santa Cruz mountains and has lived in New York City, Portland, and Paris. She’s in San Francisco now.