An Interview with Monica McClure

I first met Monica McClure back in 2013 in Greenwich Village when I was an MFA candidate at The New School. We were introduced by a mutual friend, and we spent the evening sipping red wine, discussing poetry, and contemplating the value of an MFA. Her chapbook Mood Swing had just published and I drunkenly raced home to read it. Spoilers, my mind was blown.

In the years that have followed, Monica has become a dear friend and her book Tender Data, published in 2015, has lines that still haunt me till this day: “I want to be so skinny people ask if I’m dying.”

When I envision Monica in my head, I see a bespectacled nomad navigating an apocalyptic tundra full of static televisions, outlet malls and Starbucks—her writing has the uncanny ability of awakening hopeless consumers from their iPhones and pumpkin spice lattes. She is unyielding with her convictions, and fearless when discussing mental health, family, and fashion.

Described as “the poster girl for a new generation of poets,” by NPR’s Craig Teicher, I recently sat down with Monica to discuss her upcoming chapbook from GRAMMA, writing poetry in a post-Trump world, and which iconic literary figure she would selfie with. 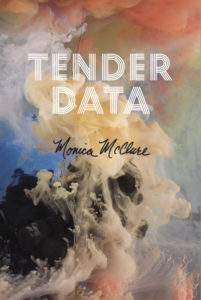 Monica, when we first met your chapbook Mood Swing had just been published, and I was immediately a fanboy.

Damn, that was a long time ago. We are old friends. I love you.

In many ways I thought Mood Swing was thought-provoking about the multiple identities the self can occupy—both in its physical and mental form—and how they are constantly in strife with each other. Do you think poetry today is still about mental health?

Yeah, I think many American poets, especially poets with white privilege like me, are able to find an audience for poems that ostensibly probe their mental health. Not to demean my chapbook or the very serious reality of mental illness — artists are meant to articulate personal and collective malaise. But, I think, in some iterations, that kind of inward-gazing is getting tired. 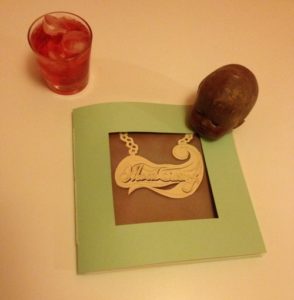 How does that make you feel about your own work?

Sometimes I condemn my own writing by that paradigm because everything artists spend their time doing is cast in a much more urgent light these days. Though, to wiggle out from under that self-criticism, I do think Mood Swing was more; it was a book that came out of realizing links between my mental, emotional, and spiritual unease and the larger culture. Specifically, the white-supremacist, capitalist, imperialist patriarchy.

Speaking of the patriarchy, how do you think poetry has changed in a post-Trump administration?

Well, I don’t know if I can point to any specific changes in poetry, overall. I do think poets are more conscious of why the hell we do what we do and whether it’s important, and, of course, we’re more intent on expressing our fear and anger and alienation.

Do you think Trump has made poets more liberated or added salt to already gushing wounds?

Poetry is therapeutic; we turn to it in times when we feel most under siege. It may be part of why that platitudinous book Milk and Honey and other poetry of the self-help variety are popular with people who wouldn’t normally buy poetry books now. On the other hand, I think a formerly comfortable readership of Liberals has woken up to the reality of America and is seeking out narratives that illuminate the experiences of the Other, or put otherness and conflict at the center of their questioning.

The idea of otherness, as far as I’m concerned, will always be an evergreen theme in poetry.

Like almost every college professor, I taught Citizen because it was the best way to teach poetry and raise consciousness at the same time. It felt necessary to show that poetry can organize and sharpen mass, expansive, voiceless, contemporary illnesses.

How has your own writing changed following the 2016 election? It almost feels like we’re in a dystopian timeline.

I’m writing nonfiction, a memoir, which feels like the most self-absorbed thing one can do, but I think I’m doing it to say what it’s been like for me, here in America in this time in this body, so I can move on and do the next thing. And, honestly, because I want to be a writer, and that’s the only thing I do half well, so I need to sell a book to keep writing books. Otherwise, I’ll just pay my bills and survive as a copywriter until I die. The end. I’ve also been writing essays, just trying to find pleasure and meaning in the things I like, and to learn why these things, like poetry and fashion, matter to me, to anyone.

Our culture lexicon has become saturated with emojis and hashtags (I’m not complaining). What impact do you think it’s had on the poetry scene?

Digital media has democratized poetry to a greater extent. It’s given poetry a platform to reach new audiences and made it possible for more people to encounter poetry unexpectedly. When I taught at Fashion Institute of Technology, my students had a roster of poets beyond the poets they’d been taught in school (and if they hadn’t been taught poetry in school, they’d read poems online) — poets they’d found on Tumblr and Instagram, either from seeking out poetry or by complete happenstance. I like that the proliferation of poetry through digital media made them comfortable with it, even if they weren’t able to verbalize what they liked and why. That was my job. Of course, not everyone’s internet is the same. My siblings, who are in the same age range as my students were, don’t read poetry online or otherwise.

Do you think quality suffers when there is so much content available?

One vexing thing about our media-saturated culture is that the cream doesn’t necessarily rise to the top, so much poetry that isn’t suited (read: branded) for social media gets overlooked. Generally, however, digital media has empowered poets to explore a less mediated contact with their readers. That’s a nice option to have.

Speaking of digital media and emojis, do you think we’re seeing an E.E. Cummings-style revolution where format has become anarchic?

Oh, good question. I think we have more tools for political action and do-it-yourself practices that challenge traditional institutions and outlets, especially for distribution. But those tools are compromised. They’re all owned by a handful of complacent Silicon Valley aliens who don’t understand people. It’s such a double-bind. I’m of the mind that artists should get paid. But by whom? Institutions come with compromises. Patrons come with compromises. If only making and buying art were affordable for everyone. But alas, we are all slaves to corporate capitalism.

If you could selfie with any literary icon dead or alive who would it be?

Screaming! Djuna Barnes and I would make a striking selfie couple. We have similar jawlines, and similar pursed mouth sneer-grins.

I’m dying at that response! You most certainly can’t filter a selfie with Djuna Barnes!

I would adjust the shadows, lighting, sharpness, contrast and all that. If she looked better than me (and she would) I’d be forced to use Makeup Plus or Beauty Plus to smooth my eye bags and Marionette lines. These Chinese selfie photo-editing apps are amazing.

Tell us about your chapbook, GRAMMA?

I’m writing a long essay in four parts, exploring the parallels and juxtapositions of poetry and fashion. Part 1 is up on their website. It’s titled “Parallel Dreams.” GRAMMA is planning to design a physical chapbook.

What’s the intersection that fashion and poetry meet?

Speaking of fashion and literature, Joan Didion famously modeled for Celine back in 2015. What was it like seeing that campaign for the first time?

Well, I have to say, I was not surprised. Fashion photography has come a long way from mere catalog images meant to forefront the clothing. Now it’s art. The aura is what sells. Didion is a model-thin white woman who was the subject of a few iconic photographs before she was the face of Celine.

I mean, I think it’s great that an older woman of great literary prowess is being flashed across billboards and screens instead of a young, emaciated model (though, I have great respect for models), but I guess it didn’t feel altogether radical to me. But that’s ok. It’s good progress. Authors have a mystique like models and actors, and I like it that way. We bards were the original celebrities.

In a world full of Kardashians and anonymous op-eds in the New York Times, where do you think the poet fits into pop culture?

Poetry is valued yet invisible. It’s everywhere — in advertising, music, fashion week show notes. It’s just not identified as poetry. My students said they’d buy tickets to see a poet perform just like they buy tickets for a concert; they just don’t know how.

Poetry isn’t mainstream entertainment. But I wonder if it could be. Maybe it’s like my mama said: No one’s gonna buy the whole cow if you give away the milk for free.

Last question: which book is on your night stand right now?

I’m one of those ADD types who reads lots of books in different genres at once. I also re-read books. I’ve got Antigona Gonzalez by Sarah Uribe, King Lear by William Shakespeare, Scorpio by Katy Bohinc, A Guide to Mexican Poetry edited by Irene Nicholson, Hope in the Dark by Rebecca Solnit, and Come With Me by Helen Shulman.

Paul Florez received his MFA in fiction at The New School. He has worked at Marvel Entertainment, Hachette, and HarperCollins. He is currently an auctioneer and his work has appeared in HuffPost, HelloGiggles, Queerty, and The Advocate. You can follow his misadventures over on twitter @mrpaulflorez.

Monica McClure is a writer based in NYC. Described by Craig Teicher for NPR as “the poster girl for a new generation of poets,” Monica’s writing has been featured in Tin House, Huffington Post, Believer Magazine, The Stranger, The Awl, and elsewhere. She is the author of the poetry collection, Tender Data(Birds, LLC, 2015) and the chapbooks, Concomitance (Counterpath Press, 2016), Boss Parts 1& 2 (If A Leaf Falls Press, 2016), Mala (Poor Claudia, 2014), and Mood Swing (Snacks Press 2013).