An Interview with YA Author and HarperCollins Publicist Martin Wilson

Author Martin Wilson isn’t afraid to tackle heavy themes in his sophomore novel, We Now Return to Regular Life. Inspired by harrowing real-life stories like Jaycee Dugard and Elizabeth Smart, the novel follows the story of a young boy named Sam returning home following his abduction years prior. However, returning home isn’t the happy ending to Sam’s story. It’s only the beginning. What follows is a gut-wrenching unraveling of secrets and regrets that shake Sam’s family and friends to their very core.

I’ve known Martin since I began working with him at HarperCollins back in 2015, and I’ve always admired his tenacious attitude when it comes to balancing his responsibilities as a publicist and a writer.

Martin and I sat down on our lunch to discuss the misconceptions that come with writing a second novel, judging a book by its cover, and that icky feeling that comes when your computer is hacked.

Martin, this is the second book you’ve published, the first being What They Always Tell Us. I think there’s a misconception that your first book is the hardest to write, and the second is a breeze. Care to debunk that myth?

In comparison to my first book, the second one was so much harder to write. There’s that whole “second novel syndrome,” which I’ve heard happens to a lot of writers. In fact, the real second novel I wrote is sitting in a box in my closet. So yeah, you write one novel and you think, Oh, this is a piece of cake. But it isn’t, and it never is.

What did you learn about yourself writing this second book?

That I can meet the challenges I set for myself. Before I wrote this novel, and even while I was writing it, I continually wondered, “Can I pull this off? Can I really write this?” And I pushed on, I worked hard, went through a lot of revisions, and I did it. The book is published. That’s not to say it’s perfect, but it’s the book I intended to write and it’s out in the world, and I feel proud about that. 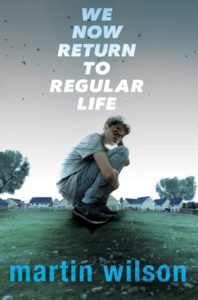 You know the age old saying, “you can’t judge a book by its cover.” However, you and I know the creative process that goes into designing a jacket. The We Now Return to Regular Life cover showcases Sam, who is at the epicenter of conflict in the book. What were your initial thoughts when you saw him on the cover? Was it jarring seeing Sam manifested before you?

I always said I didn’t like covers that showed the faces of actual characters, and then my editor sent me the cover to my book. I have to admit, at first I found it a bit jarring. But the more I looked at it, the more

I took it in, the more I fell in love with it. Something about it captured the tone, captured the novel so perfectly. Of course, that is not the Sam I envisioned, but I think we all envision a different character in our brains when we read books.

Without giving too much away, We Now Return to Regular Life is written from multiple points of view. What are the advantages of tackling such a heavy narrative from multiple perspectives versus a singular one.

Well, I tend to prefer that. It gives me a break from one perspective. Sticking with one perspective sometimes makes me feel claustrophobic. Plus, there’s always more than one side to a story, and in this case, I felt it was important for readers to see other perspectives. But I suppose with multiple POVs, in a novel, you just have to make sure that you differentiate the voices, and that both perspectives work together to tell the story, to build to the climax. There has to be a point to it, I guess is what I am trying to say.

Stories like Sam’s abduction areoften seen through a black and white lens– abductor bad, victim good. But We Now Return to Regular Life examines the gray area of this tragedy, particularly how the victim and family are psychologically impacted. As the author, what is the main take away you want readers to have about this tragedy?

I want readers, always, to be moved and entertained. I also hope my novel makes readers think about the world a little differently—to make them realize that everyone is complex, everyone (well, almost everyone) is worthy of empathy.

I know this sounds corny, but I like to think reading—and writing—has made me a more understanding person. Like you said about the “gray areas.” It’s a cliché, for sure, but the world is all gray, never black and white. I think this is important especially for young readers. That empathy muscle doesn’t always develop until your late teens.

Because we’re friends in real life, I know your computer was hacked earlier this year. That’s every writers’ nightmare! What was that experience like knowing your work was so vulnerable?

It was awful. Such a nightmare. I just felt violated. Luckily, I back up my hard drive externally, but I do so manually, and the last time I did it was February, so I lost anything that dated after February. I am now going to save my work way more regularly, and in multiple ways!

Last question—which books are you reading right now that inspire you?

One in particular I’m excited about is Joseph Cassara’s debut novel, The House of Impossible Beauties. It’s based on the NYC drag ball scene of the 1980s and early 1990s. It’s a stunner. My biggest inspirations are the works of Anne Tyler and Alice Munro. When I’m reading, sometimes I dip into their work just to charge my creative juices. They inspire me to write for sure.

Martin Wilson grew up in Tuscaloosa, Alabama, where both of his novels are set. He is a graduate of Vanderbilt University and the University of Florida, and his work has appeared in Tin House, One Teen Story, and other publications. His first novel, What They Always Tell Us, was the winner of an Alabama Author Award and a Lambda Award finalist. He currently lives in New York City, where he works as a publicist at a publishing house.

Paul Florez received his MFA in fiction at The New School. He is currently an auctioneer and his work has appeared in HuffPost, HelloGiggles, Queerty, and The Advocate. You can follow his misadventures over on twitter @mrpaulflorez.