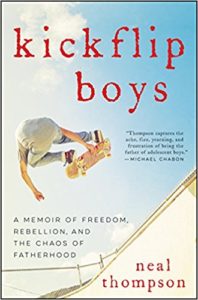 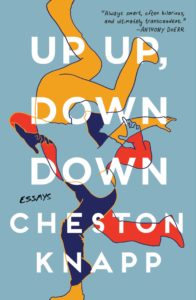 When our kids were younger, my wife and I dreamed of building a protective wall around them. Or at least a fence. It was like a campaign pledge to ourselves. By the time they’d reached middle school, their response, of course, was “fuck you, there is no wall!”—which became their teenage motto, an encapsulation of our father-son relationship.

When I first talked to my friends at SLICE about writing for this issue, I wondered if a dad raising rebellious boys might have anything worthwhile to say about borders. Then I searched through the manuscript of my forthcoming book and found dozens of references to borders, boundaries, fringes, perimeters, fences, walls, out-of-bounds, off-piste, and the like.

One sample: “In every way possible, they kept scheming to move beyond the borders of home, school, and even the skate park, out into the streets . . . out past the flimsy perimeter we’d set, into the world on their own.”

It’s only taken me twenty years to realize how much of a parent’s job involves setting and resetting boundaries. And the job of a child—especially kids like mine (skateboarders, challengers of authority)—is to explore the limits, to crash through boundaries. Coming of age is an exercise in crossing the border between youth and adulthood, between who we are (or were) and who we’re becoming. But do we ever really cross a line and become us?

That question echoes through Cheston Knapp’s essay collection, Up Up, Down Down, his first book after years of coaching and publishing others. (He is an editor at Tin House.)

When a writer friend introduced me to Knapp’s work—which I found to be funny, smart, weird, unexpected, deeply personal, and true—I recognized his exploration of reaching a certain age and fretting over what it is to be a man, a husband, a father, a son. Knapp comes at it as an ex-skater on the verge of fatherhood, while I’m the father of two rebellious skaters verging on adulthood. He, like me, nurses fears of inferiority, sifts through memories of his own flawed father, and wrestles with authenticity and an age-triggered onset of nostalgia.

I’ve spoken with plenty of writer friends, men and women, about my ongoing attempts to understand the tension—as a father, a son, a husband, an author—between freedom and boundaries. It seemed Knapp might have something to add to the dialogue, so in an act of journalistic curiosity and commiseration, I reached out and found Knapp to be eager to explore the question “When are you you?” As he put it, “When do you become the you you’re going to be? Where does identity begin and end? And what happens to that husk you leave behind?” In our phone and email conversations, it seemed to me we kept returning to that core fatherly fear: did we become who we are intentionally, or did life just happen?

In your essay “Something’s Gotta Stick,” you say that you’ve “been haunted by skateboarding” and, at the same time, “thinking a great deal about fatherhood.” It’s almost like you’re wading through some grayish zone between your younger skate-rat self and this new version of you: married, thinking about kids, but not ready to give up on that kid who could rip kickflips and 360 flips. Why do you think it’s so hard for some of us to let go of that edgy outsider we once were—or thought we were?

It’s funny, because never in my life have I identified, at least not willingly, as an outsider. I first got into skating for other reasons: some combo of athletic intrigue and, I don’t know, call it an aesthetic-spiritual yearning. I cannot overstate it, the extent to which whatever I thought of as “me” back then was skateboarding—the tricks themselves and what I could do with them. It had very little to do with a look or a mood or a “lifestyle.” I have this one vivid memory in particular of going to the grocery store with my mom and seeing a kid in the parking lot do a kickflip. I owned a crappy old-school skateboard with Bart Simpson on the bottom, but I had no clue the thing could be employed as anything but an inefficient form of transportation. When we got home I immediately started trying to teach myself (read: invent) the kickflip. I didn’t even know what an ollie was at that point . . . but that was the beginning of what became a years-long obsession for me. Skating was the first craft that teased me with the promise of mastery—and that likely has something to do with my renewed interest in it.

But the question also has a kind of “Glory Days” undertone. Why does anyone have trouble letting go of who they once were? Maybe it’s a longing for stability? A nostalgia teeming in our marrow? The idea of promise not realized? Potential left untapped? It’s all of the above and probably more. Identity is fluid and vexing and weird, and that’s its gift to us.

One could argue that the people you write about—pro wrestlers, UFO kooks, religious obsessives, skateboarders—are on the fringe, at the edge of what’s conventional and even permissible. Skating, for example, is more than a sport: it’s an art, a lifestyle, a passion, a culture—a “spart,” as you put it. My experience with skateboarding, watching my kids adopt it as their “spart,” is that it’s all about being out of bounds, being the rebel outsider. My kids were, and are, what you refer to as “urban guerrillas,” even if they and their friends all exist within the boundaries of a counterculture community that has its own set of norms. Why are you drawn to people seeking to exist closer to the edge, seeking an off-piste experience?

On the surface this probably has something to do with the fact that my life is totally conventional, almost fanatically so. I don’t romanticize the fringe, had to Google “off-piste,” which I thought was French for “real angry.” But there’s something to your question that I find intriguing. It’s that word “seeking” that keeps tripping me up. Because I’m not all that interested in folks who consciously pursue the “fringe” or the “edge.” To do so has for me a mephitic whiff of bad faith, of sensationalism. To develop an identity diametrically opposed to “conventionality,” in other words, means that you’re still bound to that very notion, that you’re still relying on it to define you. The UFOlogists I hung out with would gladly welcome a spot in the “normal” or “conventional” world. As would the wrestlers. Skaters, too, for that matter.

What’s fundamentally interesting to me about these folks is their passion. When does something go from being a hobby to being an obsession? Where’s that line? I sort of want to say that hobbies are part of an identity, while an obsession is one. There’s something viral about obsessions. Skateboarding, for example: for me, more than anything else it was a form of meditation, a way of mining something inside me. It wasn’t a way of escaping reality, but of engaging with it, creating the terms by which meaning could be made. Some folks continue to think of it as the activity of “outsiders,” I know, but I see it as closer to the spiritual self-exclusion of a monk. Look into the face of a skater working to stick a particularly vexing trick. Watch him through the falls. See how committed he is to something that is, by any conventional standard, literally worthless. Something else is going on there, and it’s that something else that I’m interested in. It’s that, I’ll venture, that qualifies it as art.

For the full conversation, pick up a copy of SLICE Issue 23: Borders, June 2018.