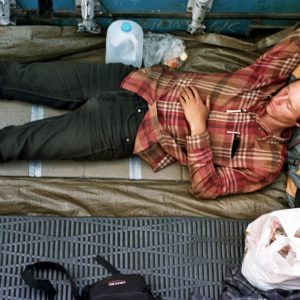 An Interview with Anders Carlson-Wee, by Christopher Locke

A friend of a friend told me I needed to read this poet named Anders Carlson-Wee, a young man living off the grid and hopping trains. “He just won an NEA in Poetry,” my buddy said. Okay, I thought, that has my attention. But then I read his poem “Dynamite,” from his award winning chapbook of the same name, and was absolutely knocked for a loop. Carlson-Wee crafts images that are raw, precise, and immediate, his language both spare and visceral. In his poems, he effortlessly pairs violence and pain with plain-spoken beauty in such a way as to make the reading experience almost transformative; you can only be fully alive when reading his work. But most importantly, he proves a trustworthy narrator and these poems bear scars, literal at times, that feel lived in and fully earned—nothing phony about Carlson-Wee.