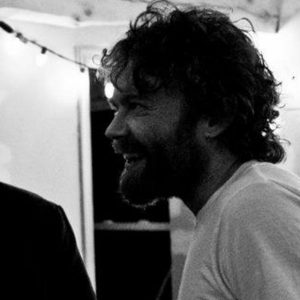 An Interview with Douglas W. Milliken

Douglas W. Milliken is one of those enviably prolific writers you can’t help but marvel at. He has written so, so much, and everything he writes is so, so good. The compellingly weird and lovely titles of his books speak for themselves (in Douglas’s own original language): White Horses, To Sleep as Animals, Brand New Moon,Cream River, One Thousand Owls Behind Your Chest, The Opposite of Prayer, In the Mines, and—most recently—Blue of the World, a story collection released by Tailwinds Press on April 15th.

On his website, Douglas self-identifies as: “Writer. Performer. Crank.” While I can’t personally attest to his “Crank” status, I can safely say he’s one of my favorite writers, and—as I discovered when reading with him at Nat Baldwin’s Apohadion Theater series in Portland, Maine—one of my favorite performers. This is all to say, Douglas is one of these rare writers whose living, breathing conversation embodies the lyricism of his writing (and vice versa). He’s also funny as hell.

The latest installment of In the Telling, our semi-weekly podcast series, captures a reading that took place at Engine, a nonprofit arts organization located in Biddeford, Maine. The reading featured Slice alums who reside in Maine: Douglas W. Milliken, Joshua Bodwell, Mira Ptacin, and Bill Roorbach. As you’ll notice in the podcast, it was lively event, fueled by great prose and some delicious beer from the folks at Banded Horn Brewing Co. Our sincere thanks to Tammy Ackerman, the director of Engine, for co-hosting the event. Peter Swegart, also a Maine native, produced this issue of “In the Telling.”