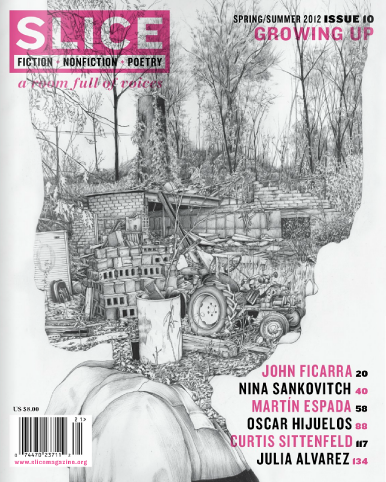 Our baby is all grown up—or at least, that’s how it feels. Five years ago, we were eagerly waiting for Slice’s first issue to arrive from the printer. We didn’t know what to expect. We’d been researching, planning, and plotting Slice for more than a year, and we’d finally reached our goal of starting our own little literary magazine.

Issue 10 celebrates growth, but, as we’ve discovered with Slice, growth is rarely what we expect. In this issue, you’ll encounter characters mired in their struggles. Not all of them will grow up by the last page. But, stepping back as readers, we can see the possibility of growth beyond the story’s end. And, as you’ll learn through interviews with some of today’s literary greats, growing up is more about hope than reaching a fixed point.