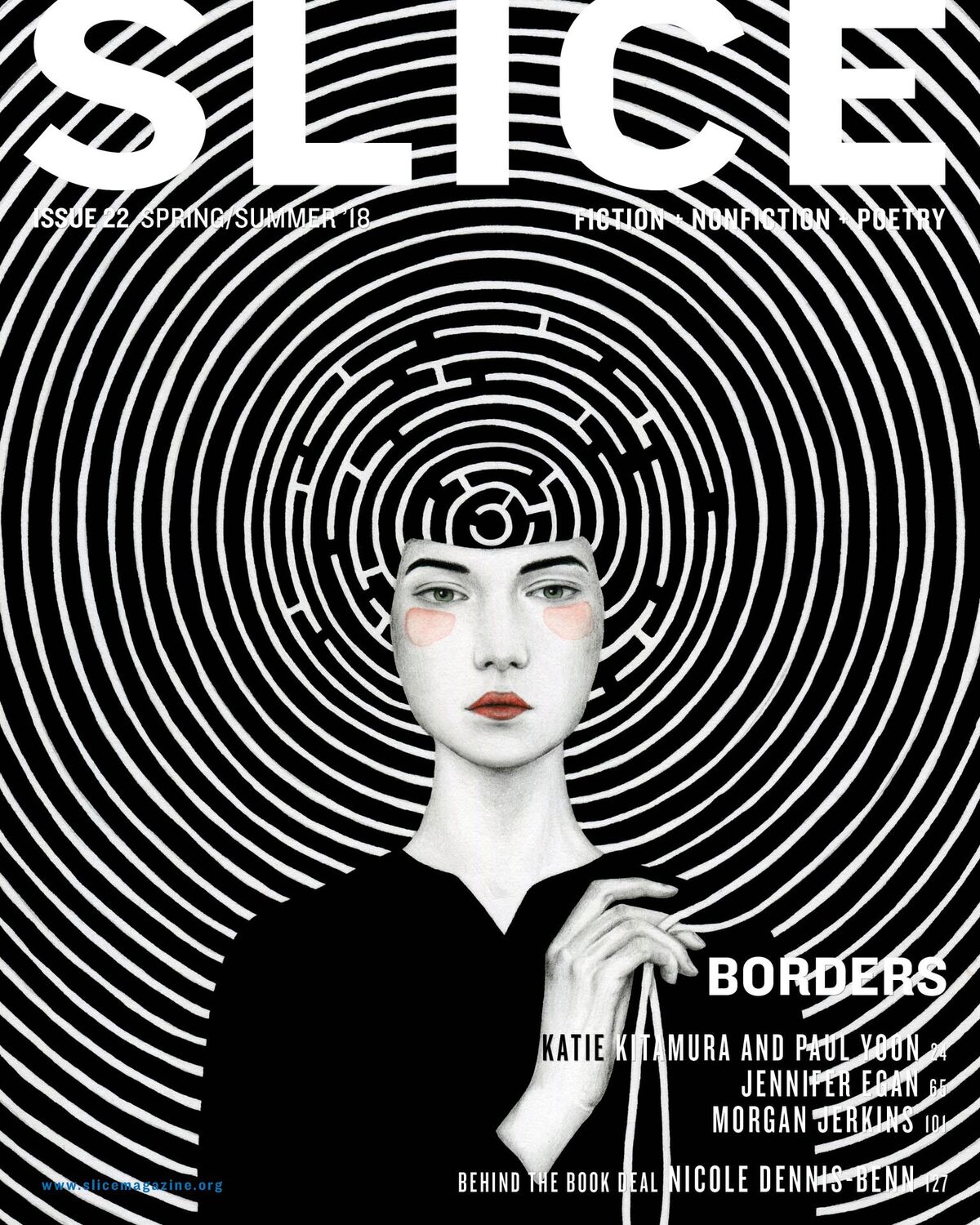 My borders have been invaded. As I work on this Borders-themed issue of SLICE with the authors and my fellow editors, a person is growing within the borders of my skin. To her, I am a universe—the swell of my belly is the edge of her space on this earth. I’m pregnant with my first child, and I’m shattered by strange, everyday miracles. And as I work—on the issue and on the incessant labor of creation—it occurs to me that the greatest gift of literature, of language, is the ability it gives us to bring another self, some other mind’s spark of consciousness, inside our skin.

It also strikes me that the fiction, nonfiction, and poetry in Issue 22 are on the somber side. We asked authors to write about borders, and in the current political climate, physical borders have become harsh places, as you can see in our stories about no-fly lists, refugee camps, xenophobic regimes, and walls that keep out the poor. In the third installment of our International Exquisite Corpse series, four authors in four languages create a story in which a woman’s consciousness and a shadowy institute morph and change until the opening from an extracted molar becomes a border crossing where an angry guard rants about illegal entries.

Raquel Salas Rivera’s poem “note for a friend who wants to commit suicide after the hurricane” (accompanied by Ricardo Alberto Maldonado’s powerful intro) is a post–Hurricane Maria cry of pain. To Rivera, a border is something that separates us, the reason we might abandon one another without power or supplies—the “great hole of fuck-it.” But then the poem tells us that a border can also be a place where we touch: “Come in and I’ll give you food and shelter while I have it,” Rivera writes.

In many of the pieces in this issue, you’ll see that borders are lonely walls we draw around ourselves and others—Frost’s good fences that make good neighbors—but they are also the cultural gray areas where we can understand each other, the shadowy spaces between childhood and adulthood, truth and lies, one person and another. If our consciousness is a maze, as Sofia Bonati’s painting on the cover suggests, then we might use language to navigate the borders of the maze. We might tell stories in order to bring another human inside the borders of our skin.

EMERGING VOICES: SOOJEE RISES by Dina Lee
With an Introduction by Luis Jaramillo

THE GROUNDED by L. Harris

THE DREAM by Melodie Corrigall

IT WILL DESTROY YOU by Stephen O’Connor

THE TRAIN by Tara Isabel Zambrano

EMERGING VOICES: A CHRISTIAN IN UNION SQUARE by Eunice Pak
With an Introduction by Said Sayrafiezadeh

BETWIXT AND BETWEEN by David Allan Cates

HOW TO BUILD AN INTELLECTUAL by Hedia Anvar

EMERGING VOICES: NOTE FOR A FRIEND WHO WANTS TO
COMMIT SUICIDE AFTER THE HURRICANE by Raquel Salas Rivera
With an Introduction by Ricardo Alberto
Maldonado

A COUNTRY OF BEAUTIFUL WOMEN by Marianne Chan

AT THE BORDER by Majda Gama

STILL LIFE WITH BRIDGE AS HANDSHAKE OF LANDS by Josh Bettinger

A FAILED TAXONOMY OF PLACE by Josie Schoel