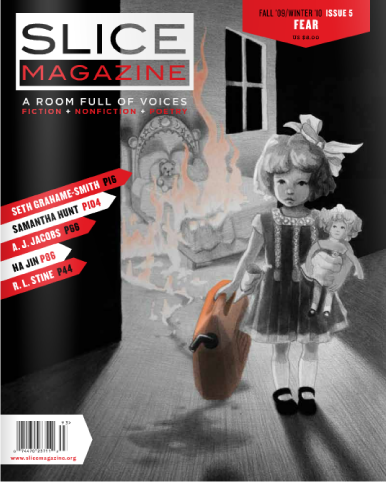 When the idea for Slice was first conceived in 2005, we were a team of three ladies—two publishers and our savvy art director, Amy Sly—working away to create something bigger than ourselves. Fast forward to 2009: Slicehas become that something bigger. A core team of twelve literary enthusiasts put together Issue 5 and we have an every-growing community of contributors, readers, and volunteers.

Slice has become so much more than a printed magazine. We’re a band of new writers with something to say: a silent; crowded bar listening to poetry; and a room full of bookworms debating literary trivia. Slice has leapt off the page and into conversations about the written word that extend to cities around the world. You, dear reader, are part of that dialogue.

In Issue 5, we’ve collected pieces that evoke fear in multitudinous ways. We hope that they inspire you to strike up a conversation that will, in its own way, grow Slice into something greater than the magazine you hold in your hand.