This is a sad tale. But the beginning and the end are happy.

One fall afternoon, at an impromptu playdate for my daughter, I met another parent. By all appearances, she was a regular station-wagon-driving mother of two, complete with baby wipes and Frozen dolls. But her day (and night) job was as a longtime “white hat” hacker called Alien, hired by businesses and government agencies to break into them and test their defenses, or to investigate “black hat” baddies around the world who already had.

The story was a writer’s dream—exciting, surprising, extraordinarily timely, and rich with action. With Alien’s agreement, I wrote a proposal for a nonfiction book about her adventures and the birth and growth of our information insecurity age. My agent sold it to a prominent and acclaimed editor. In January 2016, I signed the contract. 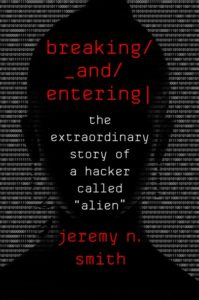 By May 2016, I’d completed the first four chapters. My editor read them and said that I was doing everything exactly right and to keep up the good work. Alien also reviewed the material for factual accuracy. She had a few corrections but commended me on my storytelling and how well I’d captured the culture of the depicted period. If this wasn’t encouragement enough, two movie producers read my proposal and were wowed by the potential they saw in it and my early chapters. They named an actress whose face was on the cover of a thick, glossy magazine in my living room and said she loved the story, too. As soon as I completed the manuscript, they wanted to shop a script treatment to studios.

I was ecstatic, of course. And anxious. Daydreams haunted me.

I work in an attic office. By late May, the heat means blasting an air conditioner that swallows any sound but my own breathing and shading my only window to shut out the sun. In June 2016, totally secluded, I started chapter five. At the end of August, I sent a draft of this and other new material to Alien, since my editor and the movie folks only wanted to see the completed manuscript. I raised my shade. Squinting, I watched clouds pass outside.

Alien had other obligations, namely hacking, so two months passed before she read the draft. When she did, she was aghast. Most of what I’d written was factually incorrect, she told me. I’d taken many hours of interviews and distorted them into something unrecognizable. Other important parts of the story were missing.

“I’m sorry,” she said, “but I think that you should start over.”

I could have dismissed these criticisms. Typical journalistic practice is not to show the subject of a story a piece while it’s in draft form, and often not at all prior to publication. The theory is that he or she is too close to the material and too partial to a particular perspective to render objective judgment. Let any source, even the subject, sway you and you abandon your higher duty to your readers. Yet Alien was so central to this story that I couldn’t proceed without her help. And, as I let her comments sink in over the change of seasons, I couldn’t help admitting their accuracy. She was right. I’d let my own preconceptions color my portrait of this specific hacker’s character and personality. I really would have to begin again on the work that had taken me all summer to complete, and only then after re-interviewing her extensively to make sure I had the details right this time.

Simply getting the facts straight—not yet even rewriting—took five days a week, eight hours a day, for another two months. Simultaneous with this process, near the new year, one of the movie producers called. I’d just picked my daughter up from her last day of first grade before winter break. I had in mind a sled ride followed by hot chocolate. Now I tossed her the iPad. “Watch anything!” I said, and ran to my room with the phone.

“How are you?” the producer asked. We made small talk for five minutes and then she shifted deftly to business. “Everyone” was eager to see if I was, possibly, ahead of schedule and could share a complete draft sooner than anticipated.

“No,” I had to tell her. In fact, I was now months behind schedule.

I emailed my editor afterward. “I need an extension,” I said.

Delays and detours happen all the time in publishing, but I felt terrible. I’d bungled an incredible opportunity. I was lucky not to have Alien quit on me. The movie star would forget my name if she had ever even known it. Someone else would publish a cool book about hackers before me. My own contract would be torn up.

In January 2017, as snow fell, I wrote chapter five a second time. Alien loved the new draft when she read it. My editor, however, who’d decided to review this and other material in progress, seemed to hate it. “You’ve gotten so close to her point of view that you’ve stopped explaining anything to readers,” he said. “What’s really happening in each scene? Why did Alien choose one action over another? How did the consequences of that decision feel? She knows, and maybe you know, but you’re not letting readers in on the secrets.”

I pushed back. “Isn’t the dictum to show, not tell?”

“Bullshit,” he said. “Writers have to show and tell. They have to say what’s happening at every point. That’s what all good storytelling does. It just does it so well that readers don’t notice.”

I closed my laptop and picked up other books I admired. And I reread the early chapters that everyone had liked. He was right. There was telling on every page.

I worked on other chapters through the rest of the winter and early spring. Then, in May 2017, I installed new air-conditioner filters, lowered the shades for the summer, and wrote chapter five and everything that followed it a third time. Before doing so, I asked Alien for a new round of interviews, this time to discuss her thoughts and feelings during the events I’d described. After some convincing, she agreed, but was so busy that the only time we could talk were Friday nights between nine p.m. and midnight. Days and nights, weekdays and weekends blurred between interviewing, transcription, and rewriting. I cut a third of what I’d written and replaced it with interior perspective. I hoped the book was getting better but had no idea. The movie producers called. I didn’t answer.

In September 2017, as my daughter told me she could now walk alone to the school bus stop, I wrote chapter five a fourth time. By this point, I’d finished a complete draft of the entire book but was determined to go back over everything again before sharing it. My own taskmaster, I spent several difficult weeks trying to articulate the takeaway in every scene. If there wasn’t one, I cut it. Little by little, I added explanations and exposition. The book was getting better. I knew it now. But it was fifteen chapters long and I was writing chapter five—again—just as I had been fifteen months earlier. Meeting even my extended deadline for submission, January 2018, seemed impossible.

I felt like I’d failed. I still worked in the attic but spent hours every day near tears. I was depressed to the point that friends and family suggested I needed professional help. In October, for the first time in my life, I saw a therapist.

Five sessions later, the worst of my depression was over. But I was exhausted. And I still had to finish the book.

This is who I am now, I realized. I am someone who spends two years, off and on, writing chapter five.

Today my editor works for a different publisher. The movie producers who contacted me have ended their own partnership. As soon as advance copies of my book were available, my agent sent one to the agent of the movie star. So far, we haven’t heard anything back.

Yet I’m pleased. My book came out this week, on Tuesday, nearly three years to the day that I signed the contract. As books go, that’s actually quite fast, notwithstanding what seemed at the time like career-ending setbacks. And if I’m being honest, the pressure and pain, excitement and dread that I experienced now feel like distant memories. I barely recall any version other than the final draft. Someone else composed those sentences. All he and I have in common are the scars.

If you’re lucky enough to have your work published, writing a book is like giving birth and then the child leaving immediately for college. Already, I’m thinking of new projects. This time, I tell myself, I’ll be ready. Whatever I start, I know that I’ll get stuck somewhere, lost and without hope, with only friends and family to remind me not to hate myself, and my own work routine to push through the rewrites. It may not be the fifth chapter in the book, but it will be “chapter five” to me. The part of the writing process that torments me most and won’t let go. The part I appreciate afterward in a way no one else can.

When I was seeking help for depression, I learned that simply naming and describing feelings and experiences can be part of the healing process. Chapter five’s title is “Up All Night.” All-nighters hurt. But eventually they end, and the sun rises, and we turn our tired eyes toward the changing light.

Jeremy Smith has written for The Atlantic, Discover, and the New York Times, among other outlets, and he and his work have been featured by CNN, NPR, and Wired.  A graduate of Harvard College and the University of Montana, he is the author of Epic Measures and Growing a Garden City.

Jeremy lives in Missoula, Montana, with his wife and daughter.