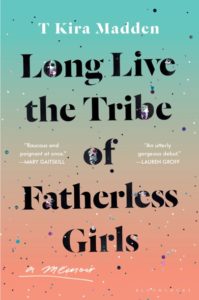 Pride: At which literary technique are you the best?

I think I have a good ear and a sensitive eye which is to say I pride myself in having good taste. As a teacher and an editor, I think I’m talented at identifying the inner rhythm and organizing principles of a piece. I’m a hopeful reader, always looking for the strengths, the threads, the metaphorical properties, rather than the ways in which a work may fall short.

Envy: What is something (such as a goal or title) you want so bad, it’s embarrassing?

To be a “literary” guest judge on Top Chef. Or Iron Chef. Or Chopped. I’d even settle for Beat Bobby Flay. Another goal: I’d like to beat Bobby Flay.

Wrath: What do you dislike most about the industry?

The false premise that we’re competing against one another, rather than working towards the same divinity and lifesaving properties of art. I don’t understand people who’re in this for fame (what fame?) or money (what money?) or self-satisfaction and pride. Art should bolster more art, more understanding, period. There is no other purpose.

Sloth: What is your favorite way to be lazy?

I watch A LOT of movies, and, recently, A LOT of television. Is that lazy? I’m not convinced. When people say they watch The Bachelor to “turn their brains off” I don’t buy that. I love The Bachelor and I’m thinking a lot, and listening a lot, as I watch it. Consuming film/television is an easy way to consume story and narrative and dialogue very quickly. It’s not writing, but it’s not nothing.

Greed: Of what can a story never have too much?

Gluttony: What do you read or research for selfish desire?

I am endlessly fascinated and repulsed by the cult of celebrity, maybe because I was raised in the umbra of a vague “fame” which was never mine, but my family’s. I love iconic paparazzi photos. I indulge in the gaze and the gossip and the mythologies created around people who are mostly just trying to do their jobs. I want to dismantle it all but I also delight in the absurdity.

Lust: What is sexiest about writing?

Writing is the best place to use your desires.

T Kira Madden is a lesbian APIA writer, photographer, and amateur magician living in New York City. Her work has appeared in Harper’s, McSweeney’s, The Sun, and Guernica. She is the founding Editor-in-chief of No Tokens, a magazine of literature and art, and is a 2017 NYSCA/NYFA Artist Fellow in nonfiction literature from the New York Foundation for the Arts. Her debut memoir, Long Live the Tribe of Fatherless Girls, is available now.